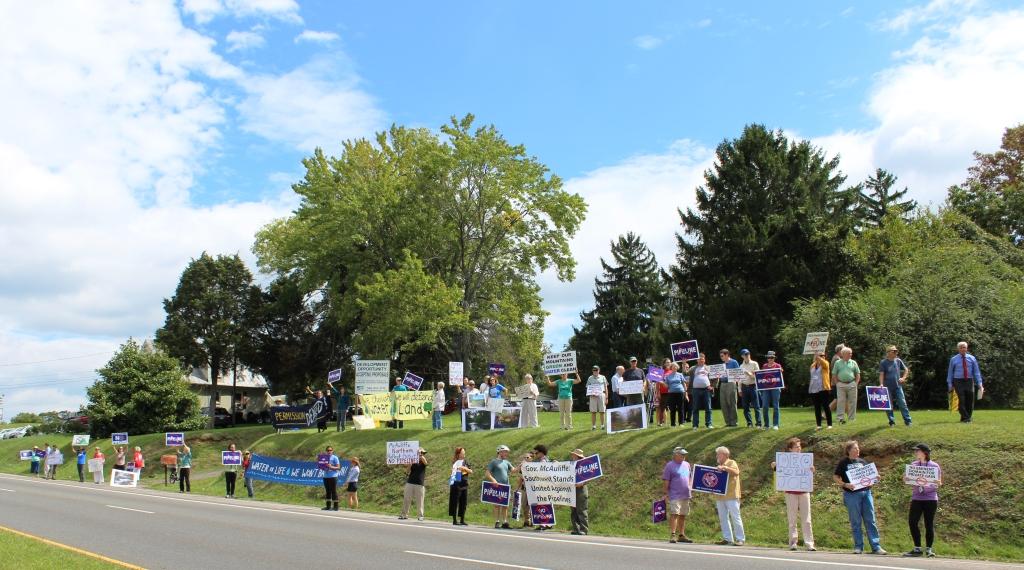 Citizens of the New River and Roanoke Valleys, impacted directly and indirectly by the proposed MVP, petition you, Director Paylor, and your staff to conduct a full, professional and transparent review of MVP LLC’s application for 401 Certification. We do so expressing significant reservation with DEQ’s process to date, which has seriously eroded public confidence. Below is a list of our concerns, followed by specific requests.

The curtailment of the public comment period and isolated venues infringe on due process.

1. Distant Venues. There has been only one hearing in the Roanoke/NRV region, a hearing in Radford, a community not directly impacted by the pipeline.

a. The comment period opened before erosion and sedimentation plans were complete.
b. The pubic was forced to comment without full erosion/sedimentation information, construction plans or completed surveys of proposed and alternative routes.
c. DEQ has refused to extend the time for public comment, while the applicant has been allowed apparently unlimited time to continue to submit required information, thereby denying the public opportunity to review and respond fully.

DEQ has inappropriately relinquished permitting authority to the Corps of Engineers through acceptance of the Nationwide Permit, a general permit which fails to study individual stream, river and other water body crossings. Unlike DEQ, the Corps of Engineers mission involves construction, and not environmental protection and conservation. The standard under which USACE will operate was not designed for supervision and regulation of the unprecedented construction of a mammoth 42″ gas pipeline across nearly 4,000 foot mountains, radically steep slopes exceeding pristine areas and protected streams, national as well as private forests and cleansing and renewing wetlands.

DEQ’s review artificially isolates the assessment of springs, streams and wetlands, erosion and sedimentation and upland impacts to separate categories, each assessed by different entities and groups of reviewers. This contrived process has (1) effectively removed two of the three (erosion and sedimentation and streams/waterbody crossings) from full public comment and (2) impairs comprehensive assessments of (a) the impact of compound hazards and (b) cumulative downstream effects (see Kastning and Dodds).

1. Either extend the review process to permit adequate public input and allow for best practices or instruct the applicant to withdraw its application and, if it is so advised, begin the process anew.

2. Conduct a comprehensive study of potential erosion and sedimentation for areas of identified concern—including but not limited to the Roanoke and Blackwater Rivers; karst aquifers in Giles and Montgomery, steep slopes and first order streams and tributaries from Peters Mountain in Giles through Franklin – by providing systemic, measured assessments, including both upland and downstream areas, of hazards and sedimentation before, during and after construction (See Dr. Pamela Dodds’ Reports on Roanoke County, Mill Creek and DEQ Comments).

3. Reject as inadequate MVP and FERC’s mitigation assessment that treat co-located geological hazards separately, thereby failing to consider the synergy of compound effects. Multiple geological hazards in many locations along the proposed route present complex obstacles to sound construction, contributing to (a) excessive erosion and sedimentation and (b) the very integrity of gas pipelines. For example, in locations where there are both poor soils and steep slopes, winching heavy machinery from atop ridges will lead to compaction, increasing run off, erosion and sedimentation and exponentially impact downstream water flow and quality. Frequent, moderate ground shaking in the Giles County Seismic Zone compounds these problems. As a further example, where there are karst valleys below steep slopes (e.g., the Giles aquifers and the Mount Tabor Plain), runoff is almost certain to adversely impact the quality of water for habitat and human consumption (See Dr. Ernst Kastning Report).

6. Incorporate a comprehensive review of “upland impacts” to our region’s river basins.

Shirked responsibility. In April 2017, DEQ staff announced publicly and unequivocally that it would require site specific analysis of stream and wetland crossings, “in order to ensure that Virginia water quality standards are maintained in all areas affected by the projects…” By May 24th, Virginia DEQ’s Director of Operations stated publicly “We got it wrong…” and the agency did an about face on its plan for analysis.

A cautionary tale: In May 2017 the West Virginia DEP approved construction permitting following inadequate public comment and review periods. Then last week, the West Virginia Department of Protection backed off and announced it would “vacate” its previous Clean Water Act Section 401 certification.

The standard: In mid April 2017, Virginia’s Director of Natural Resources Secretary Molly Ward wrote, the permitting” process must comply with all relevant state and federal statutory and regulatory requirements and remain impartial,” and “there can be no predetermined outcomes…the integrity of the agencies’ independent decision-making and review process is non-negotiable.”

The take-aways from these developments are twofold: first, that the Virginia DEQ may not stray from the guideposts of the Clean Water Act ; and second, the integrity (of DEQ’s process should be unwavering and unassailable. We dutifully ask for your full and thorough consideration and action on this Bill of Particulars.

Citizens in the Path of the Proposed Mountain Valley Pipeline
Protect Our Water, Heritage, and Rights