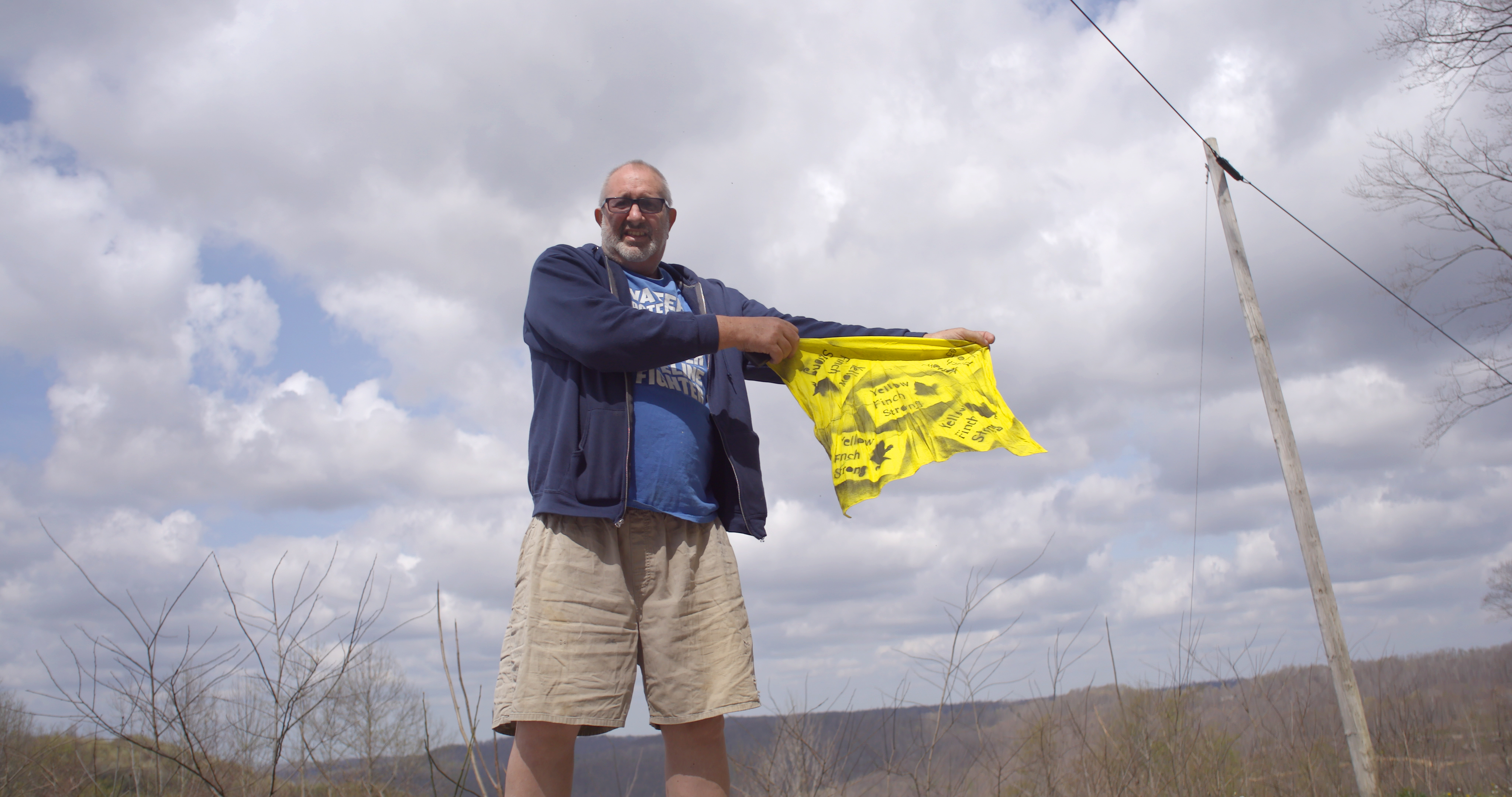 This is a guest blog by Maury Johnson, a member of POWHR’s Executive Committee and Preserve Monroe

2021 has come and gone. I can’t believe all the actions I was fortunate to participate in.

It all started during the height of the pandemic in the late winter, when I was contacted by an acquaintance, Ted Glick from Beyond Extreme Energy (BXE) organization. Ted wanted to talk about an idea he, Steven Norris and a few others had. They wanted to do a walk from Scranton, Pennsylvania (President Biden’s childhood home) to Wilmington, Delaware (Biden’s longtime home and current residence). I joined in on a virtual meeting about this walk and was instantly hooked. I met some incredible elders and others on the numerous planning calls, people who are leading lifetimes of unbelievable activism. To be included in this project was beyond belief. I still can’t believe that I was part of this group.

The 2021 Walk for Our Grandchildren occurred in late June; you can read and watch numerous videos about that on our Facebook Page. Matthew Pickett created this video. Matthew has been responsible for documenting numerous efforts that POWHR has been involved in, including the MVP Protest Run that also occurred in the Spring of 2021. (More about that later)

The Walk for Our Grandchildren in June led to the creation of part two of the Walk in late September, after the 15 Elders arrested in June returned to Wilmington for their trial. The trial was canceled shortly after we all arrived in Wilmington. Part two of the Walk included dozens of local youth who walked from Chase Bank World Credit Headquarters, past Bank of America (a major funder of MVP), to President Biden’s neighborhood. There is information about the September walk on our Facebook page. . We compiled a complete photo essay from the summer and fall.

As always, since a medical condition keeps me from walking a lot, I provided support by transporting a porta potty and other items on my trailer.

My pictures and videos for both events can be found here and here.

The action in September and the eventual court case held in November led to a planned action from Christmas to New Year’s called #OCCUPYBIDEN. The Washington Post covered some of the action.

The three activists and elite trail runners who completed this, Mercedes Walters, Sarah Hodder, and Katie Thompson, were incredible and I am so proud to have helped them navigate them across West Virginia and shown them part of what I love and am trying to protect. Matthew Pickett also created an excellent photo essay and powerful video.

I cannot go farther without mentioning others on the support team including Grace Tuttle, POWHR’s Coordinator, and Russell Chisholm, POWHR’s Co-Chair, who provided support on numerous days. Special mention should go to Diana Gooding, a Lewis County, West Virginia landowner and one of the founders of the Mountain Lakes Preservation Alliance, who definitely helped rescue the run on it’s very first day.  Also I must mention Rose DeProspero from Braxton County who gave the runners their first ‘on the route’ donation. That donation on the second day of the run definitely gave them a much needed boost in the early part of the run, especially after the run kind of went off the rails on the first day, with their hopeful route not being passable. I was especially grateful to have been the one to hand them that check, the first of many they received along the route.

I got to hand them a few others along the route as they run across Summers and Monroe County, West Virginia.  You can checkout my photos and videos here.

In April, I was also asked to speak virtually before the House of Representatives Civil Rights and Civil Liberties Committee hearing concerning Eminent Domain to Build Pipelines. The hearing was arranged by Maya Van Rossum and the Delaware Riverkeeper Network & the Victory Over Infrastructure Clean Energy Instead (VOICES) Coalition in conjunction with Committee Chairman Jamie Raskin.

I was only one of five people selected from across the country to be able to offer my testimony live before the full committee and the media. You can watch the briefing recording here.

I was part of two videos that you can see here: MVP300 Landowners vs The Law and The Hero From The Holler. To see all five videos you can go here: Property Rights and Pipeline Center – YouTube.

At this time I want to pay tribute to my friends George Jones of Giles County, Virginia and Fred Vest of Bent Mountain, Virginia, both of whom died this past year. Both men are American heroes, both serving honorably in combat in foreign wars – George Jones having served on the USS Lake Champlain CV-39 aircraft as a Navy SeaBee during the Korean War and Fred Vest having served in ground combat in Vietnam. Here at home, they were relentless in their goals to protect their beloved families, and their homes, land and waters. We lost George in February 2021 and sadly we lost Fred in fall of 2021.)

Other actions that I got to participate in during the spring and summer were the No MVP Southgate Water Walk, and Bundle of Arrows both along the MVP Southgate Route. I got to know Crystal Cavalier-Keck and Jason Crazy Bear Keck during these events. Our paths crossed several times during the year, including at the Red Road to DC – Totem Pole Dedication in Washington, DC in July.

You can see my Facebook photos and video from these events here: No MVP Southgate Water Walk, Red Road To DC Totem Pole Dedication, Bundle of Arrows  I also participated in protest actions in DC during the summer and fall of 2021. They included the Stop Line 3 and MVP Rally in June. My photos can be seen here.

October began with me being a part of ARTivism VA & Appalachian Voices Feature Film Hard Road of Hope discussion panel. The panel included filmmaker and director Eleanor Goldfield and Paul Corbit Brown of Keeper of the Mountains Foundation.

October ended with the hugely successful People Vs. Fossil Fuels Rally in October that brought hundreds of people from across the country to Washington, DC. My participation was made possible by the POWHR Coalition, Indian Creek Watershed Association, Preserve Monroe, and the VOICES Coalition. I was so pleased to be in the company of friends from West Virginia, Virginia & North Carolina like Karen & Roger May (WV), Russell Chisholm, Grace Tuttle, Lee Williams, Joshua Vana, Bill Muth, Natalie Pien, Emily Little, Deborah Kushner, Donna Shaunesey, Emily Satterwhite, Sonja Taylor, Jason Campos Keck, Crystal Cavalier, Mary Crowe, Donna Chavis (NC) and so many others. Also joining us for part or all of the week were friends from the Walk for our Grandchildren: Karen Igou, Steven Norris, Kendale Hale, Mary Liepold, Padma Devine, Andy Hinz, Jane Califf, Ted Glick, Ted Wolfner, Jane Definbaugh, Melinda Tuhus. It was also great to have Maya Van Rossum and Bridget Brady from the Delaware River Riverkeeper Network who I have come to know. Finally it was great to see Jane Kleeb from BOLD Nebraska and to give her a great big hug for everything she and BOLD have been doing for years. The old and new friends who participated in this weeklong event are too numerous to name.

My photos and videos can be seen here.

Finally, I want to mention a special event that took place when more than a dozen friends from West Virginia, Virginia and Washington, DC came to rest and give back to a special project in West Virginia called the Sweet Springs Hotel Restoration project. The project is led by our friend Ashby Berkley. We even put up a Peace Pole. Photos can be seen here.

A special thank you to all those who participated, it was a great weekend.

Other rallies and events that I was fortunate to participate in are too numerous to really talk about in this space but here are some honorable mentions:the Water Quilt Event in Newport, the NO ACP Event, the Friends of Nelson ACP Cancelation Celebration , the Friends of Buckingham ACP Cancelation Celebration, the MVP Protest at Elliston Va, Shut Down DC and the MVP Protest in Richmond, VA.

Finally, as the year draws to an end I am very surprised to have been nominated by several people and organizations for one of the West Virginia Can’t Wait Hometown Hero Awards. If that wasn’t  enough, In the last couple of days I was  notified by FracTracker Alliance’s Manager of Community Outreach and Support Erica Jackson that Amy Mall, Senior Policy Analyst for the National Resource Defense Council (NRDC) had nominated me to receive a Community Sentinel Award!

It has truly been a busy year and I would like to thank the hundreds of people who have made history and continue fighting for our region, our planet and our environment.