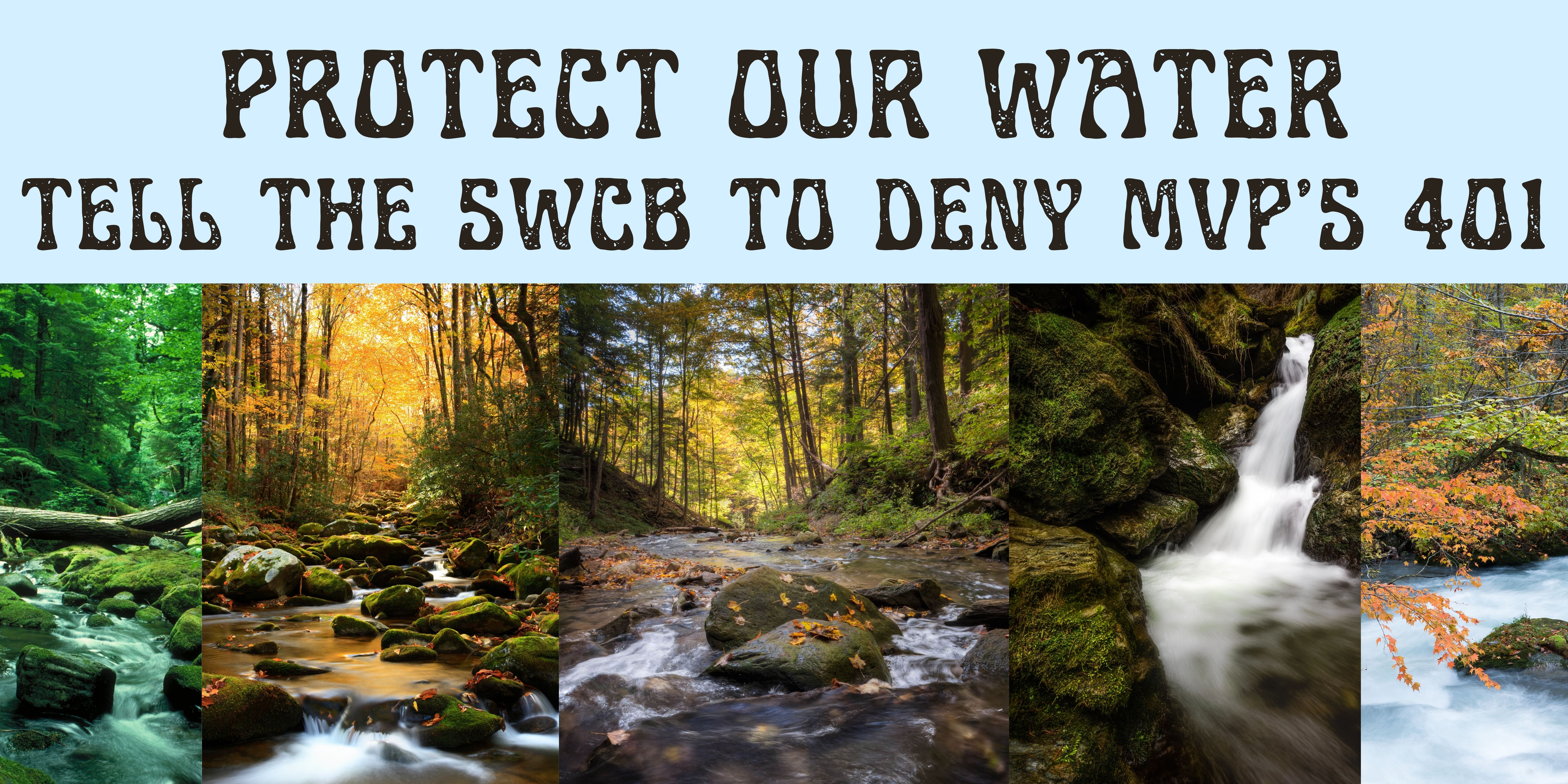 Last Monday and Tuesday, impacted communities and advocates came out together to appeal to the integrity of the State Water Control Board (referred to as the ‘board’) to make the only sane choice – deny Mountain Valley Pipeline’s Clean Water Act Section 401 Virginia Water Protection Permit application. In spite of in-person only hearings with Southwest Virginia’s full-to-bursting ICUs and record COVID cases, brave Virginians and allies took the floor to demand that the SWCB face reality and do the right thing. In comparison, Mountain Valley Pipeline (MVP) supporters continued to make the absurd assertion that shoving a 42” fracked gas pipeline through our Appalachian mountains and pristine waterways while dooming the planet to decades of methane emissions is somehow the best thing for the environment.

MVP executives and their bodyguards sat in a roped-off area at the front of the room, creating an instant participant hierarchy, apparently finding it beneath them to sit alongside workers and others who came to support them. Comments in favor of the draft permit focused on the false narrative that it’s somehow the fault of the communities “in the way” that the pipeline is causing harm to waters due to ‘delays’. In reality, these ‘delays’ are due to MVP’s own ill-conceived project, to MVP’s failure to follow the law on hundreds of occasions, to agencies’ granting of unlawful permits and to MVP suffering the consequences when those permits were revoked. The same proponents of the draft permit also harped on about economic benefits of the MVP – we here in Appalachia all know how those stories end. As the remaining challenges to MVP’s flawed permits make their way through the appeals courts, MVP failed to obtain water quality certification for the Southgate project into North Carolina. PennEast pipeline was canceled due to lack of support in New Jersey. Directly impacted residents along the MVP watch in disbelief as work continues even in the face of missing water crossing permits.

MVP supporters repeatedly stated that the project is 92% complete, a false narrative that the Federal Energy Regulatory Commission (FERC) itself recently corrected in the CP21-57 ‘boring’ Environmental Assessment, stating that the MVP is 52% complete to final restoration. To continue to cite a false figure is yet another manipulative tactic to convey the idea of the inevitability of the MVP, as Giles County resident Donna Pitt reminded the SWCB, “it does not have to be a foregone conclusion, as they [DEQ] have tried to say it does. I ask you to not allow yourselves to be used by DEQ.”

Unfortunately, ‘the worst is yet to come,’ in the form of hundreds of potential water crossings described in MVP’s woefully insufficient Clean Water Act Sections 401 and 404, and Section 10 of the Rivers and Harbors Appropriation Act permit applications. On May 27, 2021, many of those deficiencies were detailed in a letter from the Environmental Protection Agency (EPA) to the US Army Corps of Engineers (USACE), with a stark warning recommending against approving the 404 permit as proposed. The EPA noted in the letter, “more than 200 of the proposed 719 stream impacts are proposed in the Upper Roanoke watershed. This watershed includes Natural and Stockable Trout Waters, as well as habitat for Roanoke logperch (Percina rex), an endangered species.” Commenters echoing the EPA pointed out significant areas where information is missing, recommended against approving the 404 permit application in its current state because it might violate water quality standards, and explained that those specific concerns about compliance with the federal Clean Water Act Section 404 also apply to the state level Clean Water Act Section 401 permit application before the board.

Crucially missing from the application is a baseline assessment of the quality and function of each of the aquatic resources proposed to be impacted permanently or temporarily, and explanations of how water crossing methods were chosen. Commenters expressed concern about how the project would comply with Virginia’s antidegradation laws, noting that baseline conditions of each water body at issue appear not to have been conducted, thus rendering the board unable to answer the question of whether degradation will occur without having those baseline measurements beforehand. Protect Our Water Heritage Rights (POWHR) Co-Chair Russell Chisholm expressed concerns about MVP’s track record of pollution, saying, “the board should consider the likelihood that the pattern [of failure] will repeat itself and do permanent harm to surface and groundwater in karst areas where local residents rely on private wells and springs. Exceptional State Waters important to quality of life and outdoor recreation such as Little Stony Creek in Giles county and Bottom Creek in Montgomery and Roanoke counties are also at risk from permanent, cumulative impacts.”

Regardless of the maddening narrative from those who refuse to acknowledge climate catastrophe, the hearings serve a crucial function for communities impacted by the pipeline and advocates against such an insane project. They function as a plea on behalf of everything and everyone there is to save (or lose) in the face of continued disregard for life on earth. This sentiment was expressed by Jason Crazy Bear Campos-Keck, who said “in a more civilized time…I could be up here advocating for the actual rights of the water itself, that sacred creation that gives life.”

Again and again, commenters pleaded to the board to consider their children and their grandchildren and the future they are handing off to them. The board needed to hear from those it represents that this project cannot go forward. The board was asked to consider whether they represent the citizens and the water – or a limited-liability corporation from Pennsylvania. As commenter Bridget Kelley-Dearing acknowledged, such hearings often function as “hoops [to jump through] to satisfy the lie that we are being careful with our resources for our future existence. We are not.” The board must acknowledge the reality of our time, and their duty to protect. At the core, we are asking the board to do what should be the bare minimum. To limit unnecessary pollution and degradation of our waters should be the bare minimum. The bare minimum should be to protect the citizens and the waters of the Commonwealth of Virginia.

And, that bare minimum should not include a grotesque transfer of pollution harms by allowing MVP to greenwash their damages through purchase of mitigation stream credits. Asking “is this how our Virginia water regulators protect our waterbodies by trading in pollution currency?” Kelley-Dearing also spoke to the ruse of MVP’s purchase of mitigation credit purchases to compensate for impacts to streams and wetlands. Additionally, recent abatement announcements from MVP only highlight MVP’s pattern of greenwashing, as the supposed “offsets” go from one fossil fuel industry to another and do not even address the projected near 90 million metric tons of greenhouse gas emissions annually that MVP would lead to. This is not the future we need – and we have years of evidence of cumulative harms to SWVA – to use the past to inform the present.

We showed up to demand that the board do the right thing despite their poor decisions in the past. As retired physician Tina Smusz intoned, “we expect you to protect Virginians from further harm to vital water resources, including damage enabled by poor decisions of DEQ leadership and staff in five years of construction.”  At both hearings, a strength united those who spoke against the MVP, those who know we cannot see this permit passed and our waters violated without looking the decision makers in the eye. Those speaking against the permit connected the dots between this project and our larger climate crisis, which holds all of us in the lurch. On behalf of the Chesapeake Climate Action Network, Elle De La Cancela reminded the board that “we cannot look at this permit individually and not consider what greenlighting this pipeline will mean for our climate – the worst effects of climate change are yet to come.” In the same vein, Smusz again implored the board: “people can live without methane, but they cannot live without potable water.”

Ultimately, it was evident that the burden of stopping irreparable harm to their home communities and the planet at large via catastrophic methane emissions is once again put onto landowners and the public themselves, instead of onto the public servants that are supposed to protect them or the polluting applicants who stand to profit – this is process turned upside down. The entire process must be turned right side up. Water and life must come first and the burden must fall to the applicant to justify to an independent citizen board why it should ever be allowed to destroy our water, harm our communities and emit 90 million metric tons of greenhouse gasses per year when we are careening toward climate catastrophe. Evident also was the absence of a virtual hearing in the face of inundated regional ICUs due to COVID 19, the opportunity for which should have been provided by Governor Ralph Northam to safely accommodate all those who want to speak to this proposal. Shortly after the hearings, the USACE announced two virtual public hearings on the Clean Water Act Section 404 permit. Allied groups have also planned their own virtual MVP 401 hearing which will be held at 6:00 PM ET on Monday, October 25th, 2021. Sanity should dictate that we all need water and air to breathe – and they must be protected as the default. Water and public health should be the proverbial ‘roped-off executives’ with bodyguards at the front of the room. We call on the board to take this chance to remove that burden from the people and take it upon themselves. As Pitt stated, the board must “reject this permit, and let this project die the death it deserves.”

What can I do next?