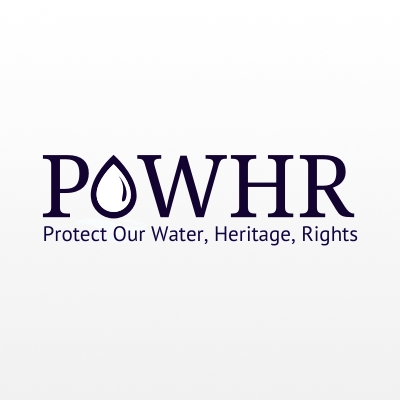 Protect Our Water Heritage Rights, a coalition including landowners, watershed and peripherally affected, their families, friends and advocates, express disappointment, but not surprise, at the certification by the Federal Energy Regulatory Commission (FERC). Mountain Valley Pipeline (MVP) LLC, and FERC officials continue to operate as though they are accountable to no one, including the courts.

Cases and Issues: We have both hope and confidence that two lawsuits filed in United States Federal District Court in Roanoke in July, and in D.C Circuit Court in September will protect landowners and communities from unjust takings in abuse of the eminent domain process, by challenging the very underpinnings of the Natural Gas Act and a tidal wave of abuses in eminent domain, include the “survey” process. With briefs filed and hearings scheduled imminently, attorneys Justin Lugar and Mia Yugo with Gentry Locke in Roanoke Virginia, will seek to stop the FERC process by injunction and will brief and argue the case against private taking by a private corporation is litigated in federal court. In the D.C. case, attorney Carolyn Elefant will seek similar equitable relief following briefings and argument in the months ahead.  No action should be taken by state or federal agencies on this project until the courts have ruled on our basic constitutional protections of private property rights.

Further issues to be challenged include but are not limited to the administrative appeal and litigation process includes NEPA regulations, tolling orders, Section 106 historically preserved properties, endangered species and continuing impediments to working with convicted corporate environmental criminals, and, last but not least, Nationwide Permit 12 under Corps of Engineers purview and states handling of delegated commitments under the Clean Water Act.

People: In recent weeks our neighbors in Texas and Florida and the Virgin Islands have suffered the tragic consequences of hurricanes, and here along the proposed path of MVP in Giles, we’ve encountered yet another earthquake. The fabric and core of our communities are long time, law-abiding, taxpaying residents, many of whom served in our armed forces, have contributed substantial careers as public servants as teachers, law enforcement and paid and volunteer fire and rescue staff – this list goes on. MVP admits its proposed route disproportionately affects the elderly in every county it would pass through in both West Virginia and Virginia. These residents enrich our lives and our sense of place, and we will not have them displaced by eminent domain for private gain. Nor will we allow MVP/EQT, a convicted corporate polluter, to waste our watersheds with sedimentation and other pollutants—we refuse to be turned out of our home places as environmental refugees.

Poor process: True to form, on Tuesday September 19th, the eve of possible certification, MVP filed over 416 megabytes of data electronically; with no apparent index, with meaningless file names and multiple unrelated documents—the reader must comb the file, page by excruciating page, to make any sense of it—this in an era when user friendly e-filing has never been easier. Courts commonly impose ethical sanctions and fines against attorneys for this sort of “data dumping.” For three years FERC has made a mockery of fair process, and Virginia DEQ, in a repeat of FERC process abuses, has denied thorough and adequate hearings and a full and thorough comment period, and full hearings and review by agency staff and Board members.

There has been repeated failure to provide organized, adequate and responsive information, ranging from biological to economic to resource and other data.  The misrepresentations and/or utter lack of care in application may be described as willful.  We have repeatedly challenged FERC’s failure to consider the question of bona fide public need by way of a comprehensive regional economic, resource and infrastructure study known as a Programmatic Environmental Impact Statement, an analysis urged by former Chair and Enforcement Chief Norman Bay upon his departure from FERC last February.

Resources: The dangers posed by the MVP crossing steep slopes, landslide-prone soils, seismic zones, and vulnerable karst – related water resources in West Virginia and Virginia have been reported in detail since the earliest days of the company’s application by public officials, citizens and growing list of scientists including Paul Rubin, Ernst Kastning, Pamela Dodds, and Chris Groves.  Both FERC and MVP have turned a deaf ear to this significant public health and safety issue presented by Virginia’s Department of Health officials responsible for drinking water supplies. (See Memorandum, Dwayne Roadcap, Div. Director,Office of Drinking Water,  and Allen Knapp, Office of Env. Health and Safety, to Drew Hammond, Acting Director, and Arlene Warren, Policy and Planning Specialist, Office of Drinking Water. Memorandum on MVP, Dec 9, 2016, filed with DEIS Comments of the Commonwealth of Virginia. (recommending a “…complete sanitary survey …performed by a team of persons with expertise in geology, hydrogeology, epidemiology, and public health. OEHS recommends that a sanitary survey within 1,000 feet on either side of the pipeline be performed at a minimum to ensure people and properties using local and regional groundwater and surface water for recreational use or human consumption are identified and protected. ) Virginia Health Department officials noted that  records for wells  constructed prior to 2003  would need to be individually searched in local health department records, as the law did not require electronic recording of those documents in prior years.

We expect that our dedicated public servants in permitting agencies in our state and federal governments will strictly attend to their permitting duties, recognizing the importance of our states’ obligations to safeguard its water quality, and will thoroughly consider permit denial and the responsibility to consider “no build” as a viable option. After an all too brief comment period and review, West Virginia saw the wisdom of vacating its approval of the Clean Water Act approval. West Virginia DEP agreed, just a day before a hearing in federal court that it needed to reconsider MVP’s application involving 631 stream crossings. DEP attorney Jason Wandling said in the court filing last week, the agency had determined the informational basis of certification “needed to be further evaluated and possibly enhanced.” Ken Ward, Charleston Gazette-Mail, September 13, 2017. We urge our Virginia DEQ to follow similar wisdom.

Greenhouse Gases and the Global Community. A decade ago, people of Bangladesh and the islands of the South Pacific, were being forced to either leave their homelands, or re-engineer and reinforce the very ground beneath them — because of rising seas. These issues have come home to the U.S in places like Norfolk, Virginia which encounters regular flooding with simple rains in recent years. Climate science and the message of storms like Katrina, Harvey, Irma, and now Maria are brutally clear: we in the developed world must clean up and rein in our greenhouse gas emissions– or our most vulnerable people, those who have done nothing to deserve the suffering wrought upon them, will perish. Pipelines increase access to gas that we can’t afford to burn, increasing gas supply and exacerbating climate change.  Methane leakage, the worst of all GHG offenders, is produced by each new pipeline—and each new line will trigger additional demand for gas fired power that could be met with clean energy sources and demand management. In addition to the methane as offender, vegetation clearing of at least 4,856 acres of upland forest along the proposed MVP alone will result in the loss of significant loss of carbon stock protection. See “MVP Greenhouse Gas Emissions Briefing,” Oil Change International/Bold, Feb 2017, quoting FERC DEIS, ES-6.

Public Resolve: In the face of this mockery of process, we note, perhaps more importantly than funding, legal, political or other outwardly visible support, we are girded from within. We are a community of volunteers and nonprofit leaders from all walks of life, of races and creeds. We will protect our water – the “gold standard of biological currency,” Barbara Kingsolver, National Geographic Magazine, April 2010, p.49; our heritage – we are deeply rooted in our land and places, and committed to one another, in kinship of family, friendship, faith and culture. We will protect our rights – our right to own and keep property, whether acquired by birthright or by purchase, as the right from which all other rights under our Constitution emanate. We reject government practices of latter day feudalism, tyranny and theft—we challenge the “FERC-MVP version” of eminent domain–we are not serfs, we are citizens, and we reject private taking for private gain.

In the next few months, the courts, the legislature, agencies and authorities can and should require FERC and MVP to reckon with the Rule of Law. In the coming months, our federal and state agencies have the opportunity to do that, as do the courts. No entity, federal, state or local, and no court, is immune from doing its job under the law, challenging though that may presently be. We look forward to the courts requiring accountability of MVP’s scofflaw group of LLCs, and to examine and reorder the very foundation upon which FERC operates. We look forward to contributing to a future of sane and sustainable energy choices for our next generations.

Protect Our Water, Heritage, and Rights

Protect Our Water, Heritage, Rights (POWHR) is a member of Virginia Organizing, a 501(c)3, with member nonprofit and citizen groups spanning from Franklin County, Virginia through Greenbrier and Lewis Counties, West Virginia. For more information on our programs and initiatives, or on how to donate please go to www.powhr.org.