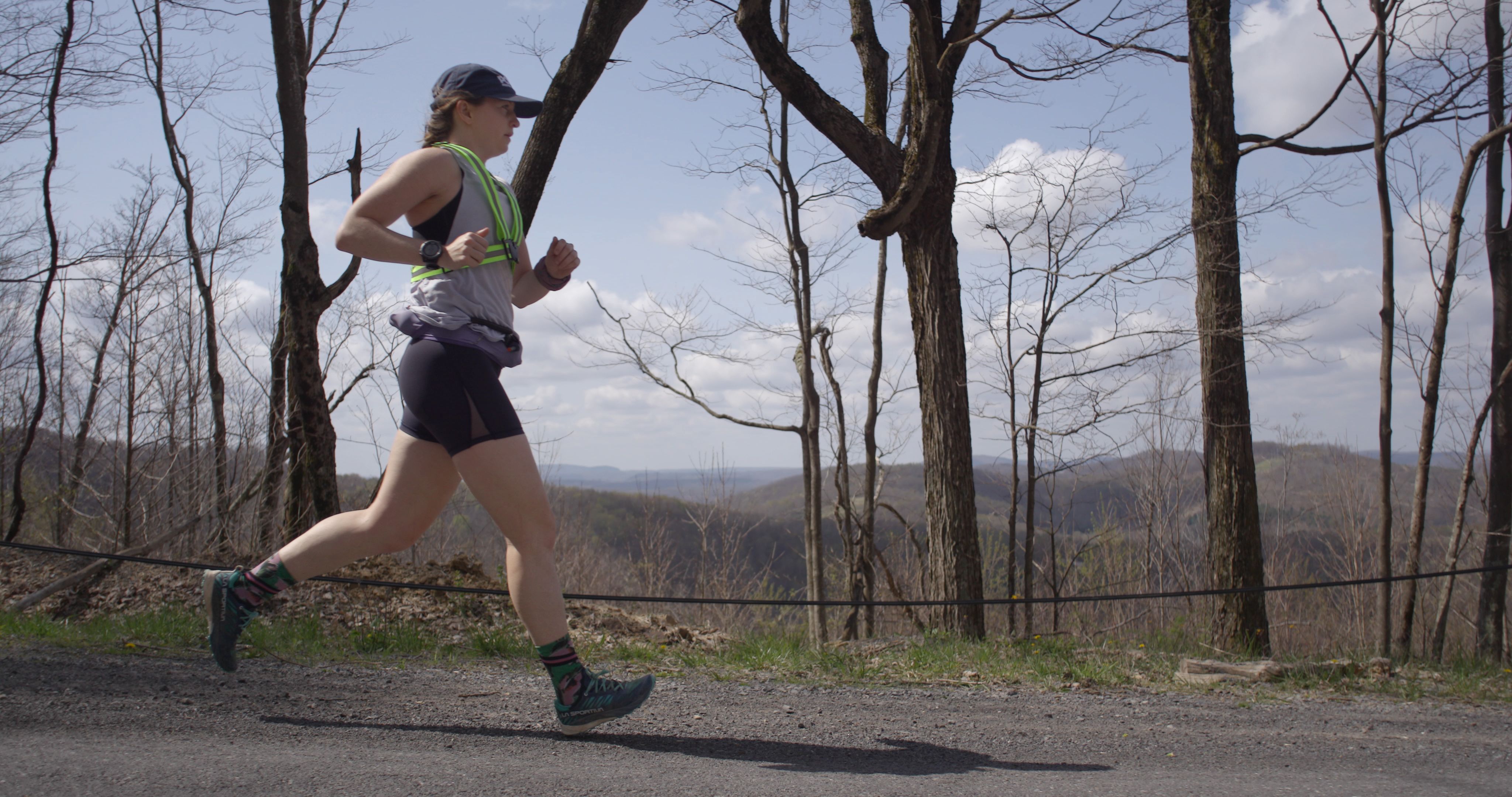 This blog is a guest feature, written by Mercedes Walters, the ‘mastermind’ behind the MVP Protest Run and one of the three runners who successfully ran along the entire MVP route.

“When you stand in alignment, you will attract people who are similarly attuned” – Dr. Nicole LePera

This project reflects this quote, for without similarly attuned people this project would not have happened.

2020… am I right?! What a blip in time to live through. My 2020 was challenging much like it was for everyone. Right before the start of 2020 my partner, Issah, and I decided to move back to the east coast from Colorado, a place that we had fallen in love with. We both enjoy all the outdoor activities and had moved to Colorado for the lifestyle so leaving was hard. The move back to Washington, D.C. was motivated by a desire to continue to save money for a house and spend time with family after living on the other side of the country for a couple years. We had decided that Issah would stay with his family in Washington, D.C. while I traveled to Connecticut to stay with my family for the year. I was never very close with my family and after many years away I had forgotten (or blocked out) how hard it was to cohabitate. Even though we were never close I had grown and thought my current self would fare better than my younger self.

As 2020 began and the pandemic took off, my relationship with my family became strained. In my job as a speech therapist, I work with the geriatric population—it was my duty to go above and beyond with safety measures to ensure the well being of my clients. Employing those same expectations on my family was difficult. My family are the kind of conservative Republicans that have Rush Limbaugh and Donald Trump as the core of their political diet, so you can imagine what I was up against. As the stress of the pandemic and my family’s negligence weighed heavy on me, the social justice movement Black Lives Matter also gained traction. I felt very isolated in a family that said, “racism doesn’t exist anymore,” and I struggled significantly. I knew that this movement was something important that related directly to me and I wanted to be a part of it. I had the ability to step up and utilize my privilege for change. So naturally, as an athlete that enjoys running ultra marathons I decided to run 114 miles across Shenandoah National Park and called it the 100 Mile Protest. The protest would also be a fundraiser and the donations would go to a group called Black Girls Hike RVA, a meetup hiking group for women of color located in Richmond, VA. While planning this protest, I also gained knowledge about multiple pipelines being built through West Virginia and Virginia, and chose to integrate my passion for the environment into the protest run.This project became the catalyst for my involvement in pipeline fighting and social justice.

After completing my single-person moving protest in September 2020, I still wanted to do something more, something bigger. My protest run had gained the attention of Clare Gallagher, a sponsored ultrarunner and climate activist through Patagonia. Clare reached out and said that if I had any other ideas then Patagonia might be interested in supporting a project. So I pitched an idea of running the length of the Mountain Valley Pipeline and highlighting the community fighting it to Patagonia. It was only a baby idea at the time and I had no idea if it was actually possible to complete it. Surprisingly, Patagonia agreed to sponsor the project and I had to commit. I knew I didn’t want to run this thing alone so I went searching for teammates!

The Shenandoah National Park (SNP) 100-mile Appalachian Trail segment has become a hot spot for fastest known time (FKT) attempts, especially during the pandemic with many running races cancelled. So I thought it would be a great place to look for strong local ultrarunning women that may want to participate in a protest against the MVP. That is how I stumbled upon Sarah Hodder and Katie Thompson. At the time Sarah was training to attempt the SNP FKT and she manages a running store called Two Rivers Treads in Ranson, WV. Katie is her close friend that also works at the running store and is a local race director. Both women are not only involved in the local West Virginia running scene but are also ultra crushers! I reached out to Sarah and Katie via Instagram, they agreed to join me to run the MVP protest, and suddenly we had a team! On my first attempt I found two women that agreed to run this project and were willing to place their trust in me as a leader, having never met me. It would not be until mid-project that I would come to find out that these women also had the same social upbringing as me and had been struggling with similar family dynamics due to the political climate. The only time we would meet before the project start date would be via Zoom to discuss trip planning, and there was a lot to plan. Getting to know each other and our motivations seemed unnecessary for some reason, it was like we just clicked and got straight down to business. Countless Zoom meetings, building three different maps for navigation, and multiple Google spreadsheets consumed the months leading up to the project. I would have been way in over my head without Sarah’s and Katie’s unwavering support.

My teammates and I had never visited the section of West Virginia and Virginia that the pipeline was traveling through and we knew we would need local assistance. In order to make the most impact, our goal was to integrate the community into this project as much as possible and raise awareness to the seven year battle they had been fighting. We connected with Protect Our Water, Heritage, Rights (POWHR), which is an interstate coalition that has been instrumental in fighting the MVP. Connecting with POWHR would be one of the most clutch decisions we would make. We gained access to what felt like an underground organization—the pipeline fighters, a collection of residents directly affected by the pipeline and community members passionate about preserving land and human rights. These leaders were the real deal—fighting and stalling pipelines for seven plus years in West Virginia and Virginia. Without the buy-in from these community leaders, this project would not have been possible. Again, I did not know these humans, we had met only a couple times via Zoom. Yet my teammates and I had zero hesitation placing all our trust in them. Here we were, a group of three millennial female athletes about to infiltrate a region depicted as deeply conservative with an economy heavily reliant on extractive industries, to protest a controversial and divisive pipeline project. We needed support and insights that only the locals could provide. We were moved by local leaders to connect with the Monacan Indian Nation Cultural Foundation when we learned that much of the MVP crosses lands that are the ancestral homes of tribes that are part of the Monacan Alliance. This would culminate in a shared meal and gathering with representatives of the Monacan Indian Nation Cultural Foundation’s Board of Directors.

I found my love of trail running in the Blue Ridge Mountains, whose health is negatively affected by the MVP, so I felt a personal responsibility to protect it. I desire to be a homeowner with significant acreage in the future so I find the forced land acquisition the MVP has enabled troubling and want eminent domain to be illegal. This fight for me is not just about broad social and environmental justice. This fight is about what my future and my children’s future will look like. The impact of the MVP is multifaceted and intertwined, negatively affecting geological structures, waterways, and air quality significantly. The health of our Earth depends on the shift away from fossil fuels in our lifetimes to curb the impacts of climate change. So the question became: why not this pipeline? This project offered a way for me to use my privilege for good, become connected to an inspiring community, and create a direct impact for change. The convergence of people, focus, intention, purpose, and timing all seemed to align—and as you will read, things almost never went exactly the way we planned, they turned out even better…

Join POWHR and the MVP Protest Runners for a special event on June 24th, at 6:30 PM. See new footage from the run, hear from impacted community members and take the next steps in opposition to the MVP with us.