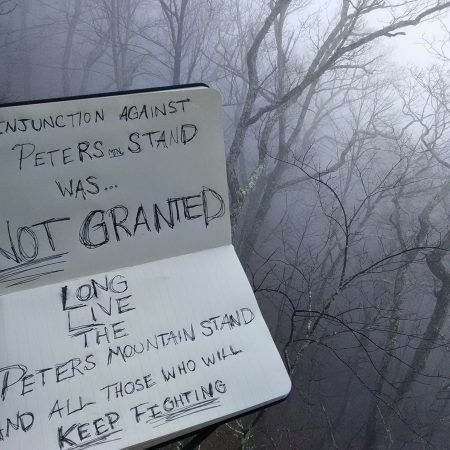 During the hearing on a petition for preliminary injunction filed by MVP against the tree sitters, MVP attorneys argued and the project manager testified that, if the petition was denied, MVP would suffer economic harm. However, based on the presented evidence, Judge Irons disagreed.

“Needless to say, the possibility of economic harm to Plaintiff, should this request for preliminary injunctive relief be denied, is speculative, at best,” the Court’s Order said. “Also, due the scope and complexity of the project, this Court is dubious that it will be completed and operational, within the time frame contemplated by the Plaintiff.”

In testimony, licensed WV surveyor Marshall Wayne Robinson asserted that the tree sitters were located seven feet to the west of milepost 196.29, which is within MVP’s permitted tree cutting zone in the Jefferson National Forest. However, “in the course of cross examination, it became apparent that the witness was testifying that the location of the tree sits, the mileposts in question, and other relevant matters, was based in whole or in part, on the work of other surveyors,” the Order stated. Additionally, most of the points Robinson was using for reference were determined based on their distance from the Appalachian National Scenic Trail.

“This Court would simply observe that ANST is not a fixed point, it is not paved or fenced, and that it is simply a footpath, at the top of a steep, wild, rugged and inaccessible mountain, existing within a fixed corridor,” the Court’s Order said. “The location of ANST changes according to the whims and footsteps of its users, and it should never be used as a fixed monument or reference for surveying purposes, as used by Plaintiff’s expert and as depicted by the document marked as Plaintiff’s exhibit 13 [the map presented in Robinson’s testimony].”

Judge Irons also noted the issue of rounding involved in the map presented by MVP allegedly showing exactly where the tree sitters were located.

“The use of “rounding,” perhaps tolerable in other contexts, is not acceptable here for the simple reason that the range of error inherent in “rounding” has the potential to subsume within it the precise distance which it purports to measure,” the Order said. “Such a range of error eliminates any probative value of the proffered exhibit.”

Additionally, Irons noted that Robinson has a vested financial interest in the project being seen to completion, as he has been a contracted employee of MVP since 2014.

“While this does not disqualify him as a witness, and indeed, he has appropriate qualifications to testify as an expert witness, his testimony has to be considered as that of a person who has a significant financial stake in the outcome of this litigation and a significant interest in its outcome,” the Order said.

This issue of financial interest, Irons noted, is also present in the testimonies given March 13 by Robert Cooper, MVP project manager, and Ralph Wright, Security Director.

Of note in Irons’s Order is the consideration of public interest. Specifically, Irons stated that the tree sitters “generally represent the interest of the public and the environment, such as the interest in protecting the waters underlying Peters Mountain, its flora and fauna, its view shed, the ANST, and similar interests that will or may be destroyed, if this request for a preliminary injunction is granted, and the project proceeds before the public interest is considered at a trial on the merits. These interests may suffer irreparable harm if the preliminary injunction is granted.”

Based on his consideration of the evidence and facts as they were presented, Judge Irons asserted that the preliminary injunction should not be granted, and that the case should proceed to trial without emergency relief for MVP.

Monroe County, WV — After hearing additional evidence March 20, Judge Robert Irons of the Monroe County Circuit Court denied Mountain Valley Pipeline, LLC’s request for a preliminary injunction against Appalachians Against Pipelines, as well as two named and five unnamed individuals.  Appalachians Against Pipelines is the loosely-formed group associated with the tree sit currently taking place on Peters Mountain within the West Virginia boundary of the Jefferson National Forest, in close proximity to the Appalachian Trail.

In his ruling, Judge Irons found that Mountain Valley Pipeline’s presented evidence regarding the location of the tree sitters was questionable enough that MVP did not satisfy the burden of proof needed to incur the preliminary injunction.

MVP attorneys brought Marshall Robinson, President and CEO of Allegheny Surveys, Inc, to testify in regards to a map created by his company late last night indicating that the platforms associated with the tree sit are within mileposts 196.26 and 196.29, and thus within an area that MVP has permission to cut trees.

William DePaulo, arguing for the respondents, pointed out the numerous flaws existing in MVP’s presented map of the locations of two platforms, including issues with the scale of the map and inaccurately represented distances between mileposts. He pointed out that MVP carried the burden of proof to show where the tree sitters are located relative specifically to milepost 196.29, a distance they never clearly indicated on their map.

In his closing arguments, DePaulo conceded one way that MVP does stand to suffer irreparable harm as a result of the tree-sitters’ actions: the tree camp brings MVP further into the public eye, and additional public scrutiny may, indeed, result in irreparable harm for the company as the American public questions the need for the pipeline itself.

You can listen to a statement from DePaulo here.

Pipeline opponents have expressed their gratitude for the courage and hope the tree sitters have inspired in pipeline resisters throughout Virginia and West Virginia. Such admiration was shown at the Giving Witness vigil in Newport, VA March 18, where attendees expressed both lamentations at the pain MVP has brought over the past four years, as well as hope and energy moving forward, in part bolstered by the tree sitters.

Through posts on the Appalachians Against Pipelines Facebook page, the tree sitters have expressed their thanks to their supporters and those who continue to fight the Mountain Valley Pipeline.

A morning with the pipeline protesters (Register-Herald)