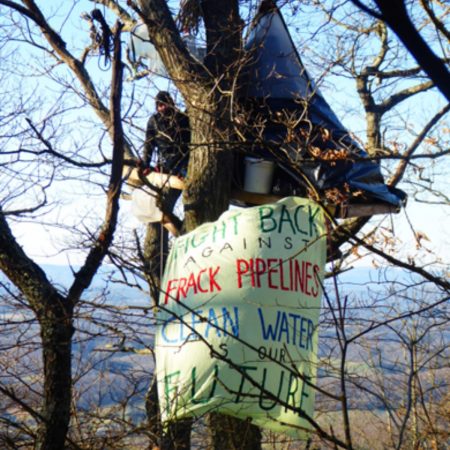 Monroe County, WV– Citing “credible” evidence presented by counsel for the respondents in the case of Mountain Valley Pipeline, LLC vs. Appalachians Against Pipelines, Judge Robert Irons has set an additional hearing date for Tuesday, March 20, 2018 at 10:30 AM in the Monroe County Court. According to the court order,

The “Notice to Proceed” offered as trial exhibit 5, appears to authorize construction activities within the Commonwealth of Virginia, but generally prohibits any such activity within the boundaries of the Appalachian National Scenic Trail, between mile posts 196.29 and 196.39.

Petitioner represented that it had such a document, and requested leave to file it as a supplemental exhibit. At the time, William De Paulo, as counsel for one of the Respondents objected to leaving the record open, which objection was overruled, and leave was given to supplement the record, with leave to the Respondent to make such response to this supplemental filing as might be appropriate.

Since that time, Petitioner has filed as a supplemental exhibit, a “Notice to Proceed” from FERC, as to the portions of the project occurring with the geographic boundaries of the State of West Virginia, between mile posts 65.6 and 196.3.

Respondent subsequently filed a responsive pleading, with an attached affidavit from Daniel Shaffer, a purported expert in Geographic Information Service (GIS), along with a map, showing that the area in question, in which the Petitioner is seeking to restrain the Respondents from engaging in activities calculated to interfere with tree cutting, to be outside the area for which Petitioner has a permit, and outside the area in which the Jefferson National Forest is closed to such activities.

The Court has reviewed these documents, and has considered the evidence offered at the previous hearing, and it appears that there is a credible issue, as to whether or not the area in question, is within the permitted area in which the Petitioner’s activities are allowed to occur.

As of this date, the tree sitters have been perched in their tree-top village for 19 days.