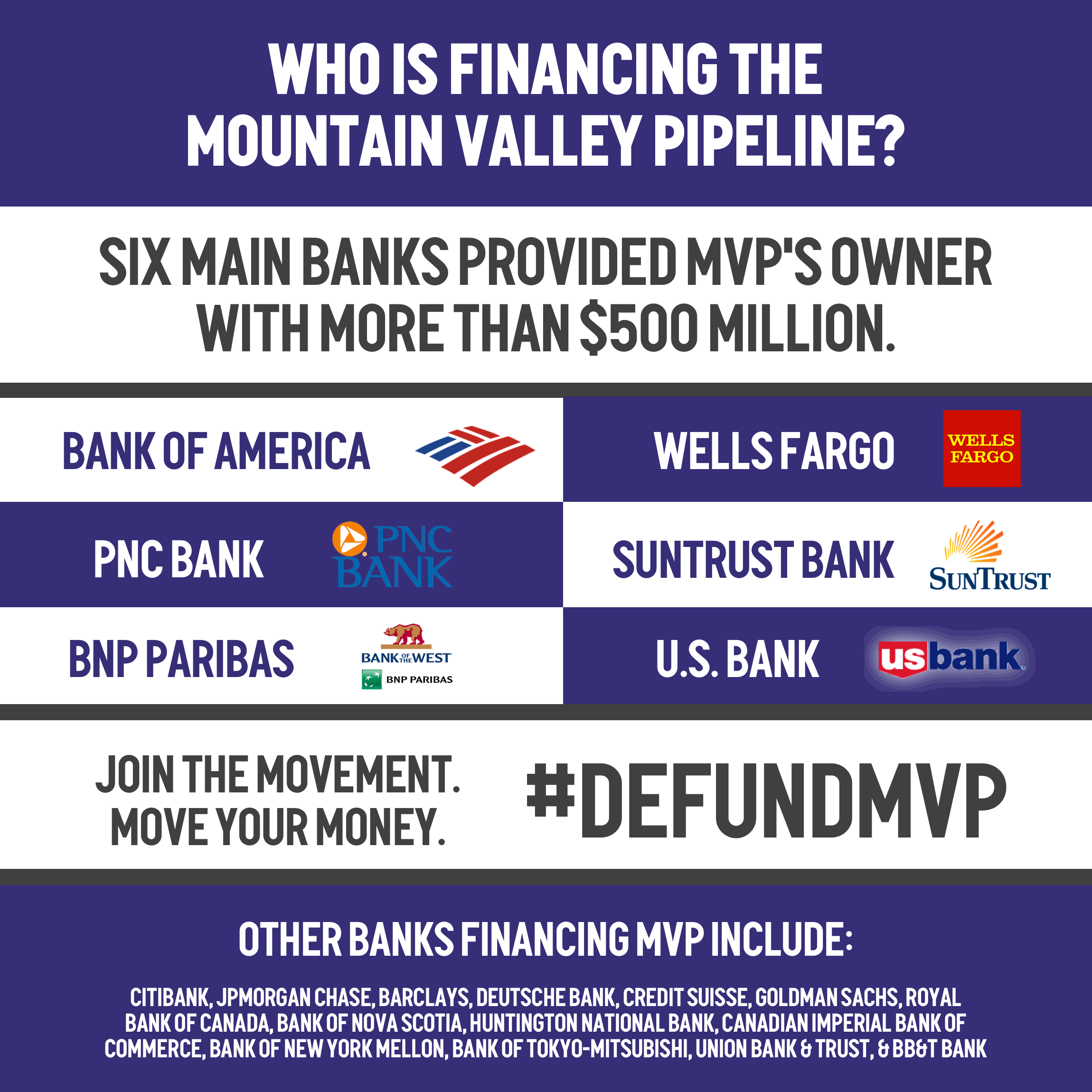 Landowners Launch Call to Divest From Banks Behind MVP

New analysis shows Bank of America and Wells Fargo are top backers of fracked-gas project that threatens land, air, and water in Virginia and West Virginia

Residents of Virginia and West Virginia opened up a new front today in their fight to stop the 301-mile Mountain Valley Pipeline: targeting the major U.S. ‘main street’ banks on tap to finance the fracked-gas project’s $3.5 billion price tag. Landowners along the pipeline route are calling on customers to move their money out of the top six U.S. banks behind the pipeline – led by Bank of America and Wells Fargo. The banks are identified in a new analysis released today by Oil Change International that examines how the pipeline will be financed.

The landowner and citizens’ groups Bold Appalachia and Protect Our Water, Heritage, Rights (POWHR) launched today’s call to action and are planning an upcoming “Defund MVP” week of action in Virginia and West Virginia from June 19 to June 23.

“Now is the time to pull out our pocketbooks, put our money where our mouth is, and divest from the banks financing this pipeline,” said Carolyn Reilly, a regional Pipeline Fighter with Bold Alliance whose farm is in the path of the proposed pipeline in Rocky Mount, Virginia. “The Mountain Valley Pipeline is focused solely on making money, setting private financial interest as top priority. As farmers and landowners, we say ‘no’ to a greedy system that supports eminent domain for private gain while threatening our clean water and land.”

The “Defund MVP” campaign joins a growing movement of communities, tribes, and cities across North America that are targeting the financing behind dirty pipeline projects, from Dakota Access to Keystone XL, and putting increasing pressure on major banks to move money flows away from risky fossil fuel projects that threaten the climate and communities.

The Oil Change analysis draws a direct link between the banks providing corporate-level financing to pipeline company EQT Midstream Partners (EQM) and the money that will fuel the Mountain Valley Pipeline. EQM, the main driver of the project and the largest investor in it, plans to rely on corporate-level financing, rather than direct loans, to fund the pipeline.

“Our analysis shows that Bank of America and Wells Fargo are signed up to funnel the most money into this polluting pipeline,” said Lorne Stockman, a Senior Research Analyst at Oil Change International who co-authored the briefing. “These same banks are embroiled in a backlash over their funding for the Dakota Access Pipeline and major tar sands pipelines. The Mountain Valley Pipeline is another black eye. The customer backlash will not let up unless banks heed the call to defund dirty pipelines.”

Bank of America is providing over $141 million in funding to EQM while Wells Fargo is the lead arranger of the company’s credit facility. PNC, SunTrust, Bank of the West (via parent company BNP Paribas), and U.S. Bank are also significant investors in EQM’s key sources of pipeline finance. While U.S. Bank recently pledged to end project-level loans for oil and gas pipelines, it remains a key corporate-level financer of EQM and several other pipeline companies.

“The Mountain Valley Pipeline route is going through the middle of my property, Doe Creek Farm,” said Georgia Haverty of Giles County, Virginia. “There are four businesses that would be directly and adversely affected. I will never put a cent of any of my businesses in BB&T, Bank of America, Wells Fargo, or Union Bank & Trust. I will also post signs calling out all of these banks for the thousands of visitors and customers who visit each year and who love this land. They need to know.”

The Mountain Valley Pipeline would open up a new spigot to increase the flow of gas from fracking operations in the Appalachian Basin. It threatens communities’ drinking water, pristine forests, farms, and historic places along the route from northwestern West Virginia to south central Virginia. A previous Oil Change analysis showed the project would be responsible for close to 90 million metric tons of greenhouse gas emissions annually, equivalent to 26 coal plants or 19 million vehicles on the road.

View the “Defund MVP” call to action at: https://powhr.org/divestmvp/

Download the briefing on the financing behind the Mountain Valley Pipeline at: http://priceofoil.org/2017/05/18/banks-behind-the-mountain-valley-pipeline