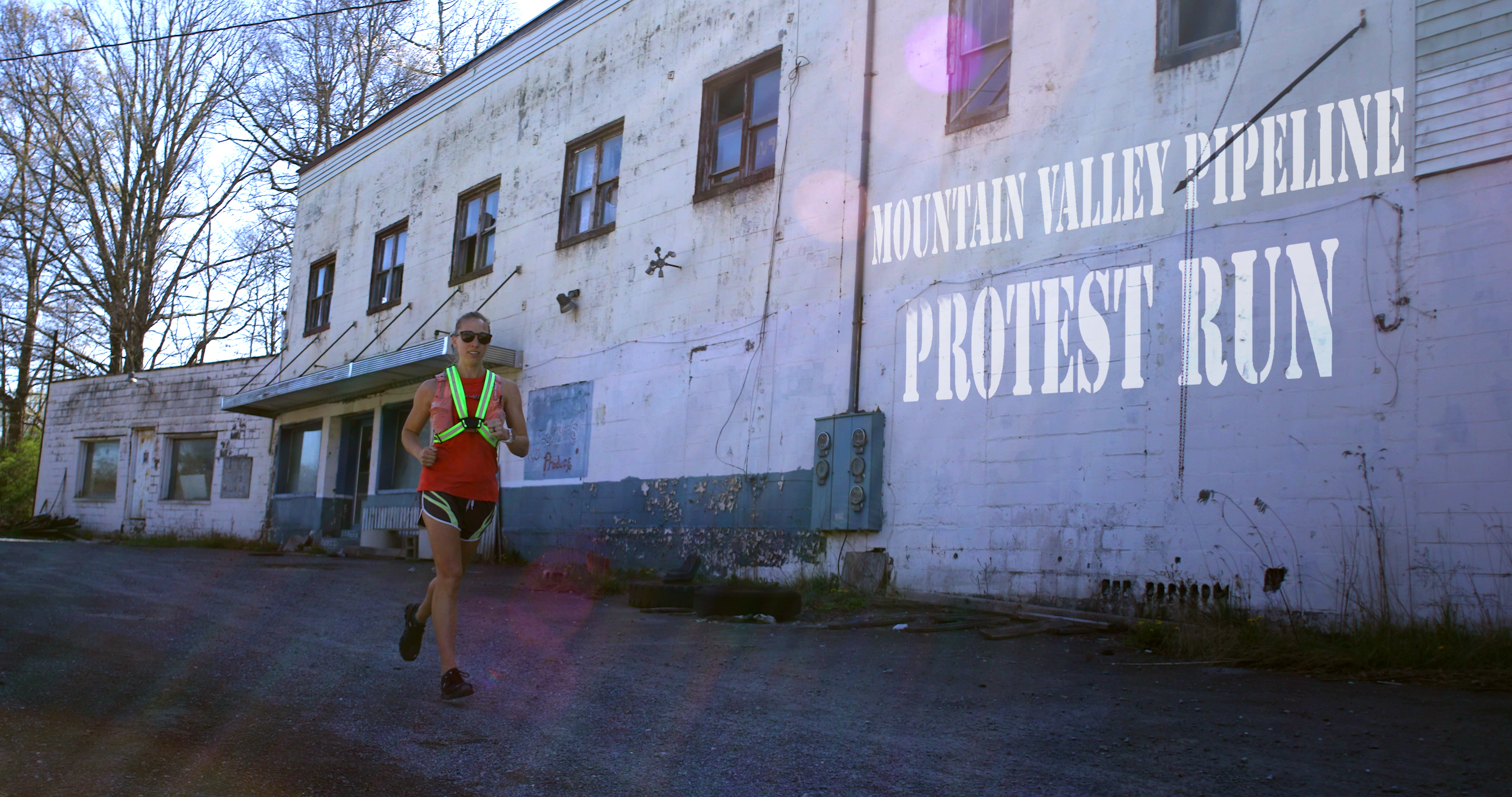 At dawn on Sunday April 25th, three women embarked on a nearly 415 mile journey. They successfully ran and cycled along the entire Mountain Valley Pipeline (MVP) mainline route to protest the building of the pipeline, collecting and sharing stories along the way. The MVP Protest Runners wanted to raise money to benefit impacted communities while they ran to oppose its construction, choosing to donate funds to POWHR and the Monacan Indian Nation Cultural Foundation. Thus far, they are around a thousand dollars away from their $15,000 goal. The runners have been able to raise their goal several times, following groundswells of support.

In addition to the grievous harms the runners learned about from their interactions with the many people, ecosystems and communities this project has devastated on the ground during planning and construction, according to a report by Oil Change International, if put into service the MVP alone would be responsible for nearly 90 million metric tons of greenhouse gas (GHG) emissions annually. Blacksburg, VA resident Carl Zipper calculated that, if constructed and operated as planned, the MVP alone would be responsible for nearly 1% of the entire US Energy Sector’s emissions. As calculated by the Intergovernmental Panel on Climate Change (IPCC), catastrophic and widespread consequences of climate change are in motion today, and the future is considerably darker if we cannot keep the warming below 1.5 degrees Celsius from pre-industrial levels. Therefore the very last thing we need is another high-pressure fracked gas, unnecessary, methane-spewing monster of a pipeline that puts people, ecosystems and the world at large in extraordinary danger.

The MVP Protest Run’s ‘mastermind’, Mercedes Walters, remarked on what inspired this protest project, saying, “I have been so inspired by the community effort to fight against the Mountain Valley Pipeline, I believe that this fight deserved to be highlighted as a shining example and motivation to the rest of the world.” MVP Protest Runner Katie Thompson joined the project because she felt “impassioned, motivated, angry and fed up… and determined to help those affected by the potential Mountain Valley Pipeline.” The third MVP Protest Runner, Sarah Hodder, remarked on the inspiration to join this form of protest from her own childhood in West Virginia and time spent with her father, where “he’d talk about the history of the Blue Ridge Mountains and how they were forged. Fast forward a number of years, and the hours I spent outside with him would define the way I lived and ultimately save me from the toils of mental health issues.”

The runners encountered rainy, grey weather when they arrived in Mobley, WV on April 24th. That did not stop spirits from rising as excitement for the endeavor grew. Dinner was shared with supporters and an impacted landowner from nearby in West Virginia. Piping hot coffee was made to rouse the crew at 4:30 AM on Sunday morning after a cold and rainy night. However, spirits were high and the runners were ready to go. The first morning of the MVP Protest Run proved to be an immediate adventure and challenge, as the runners were prepared and well equipped for.

At the close of the first day, the MVP Protest Runners remarked, “the journey has begun. And what a journey it’s already been. We’ve been taken aback at the juxtaposition of such a beautiful landscape adjacent to the machinery and disruption of the pipeline compressor station. Our journey begins with a number of hurdles. We came upon access roads that were no longer in use — but rather turned into rivers. Navigation has been a challenge to say the least. But we’ve been working through the kinks and are making moves forward. Thank you to everyone offering their support, guidance and help. And thank you to everyone following along and donating to the cause!”

From start to finish, the MVP Protest Runners remained resolute in their intention to experience on foot and by bike wheels the breathtaking, historically important, culturally rich and sometimes treacherous terrain that the Mountain Valley Pipeline continues to slice through. The runners repeatedly noted the juxtaposition of the destruction with the beauty of the lands.

The MVP Protest Runners encountered a variety of wildlife and breathtaking scenery on their route. Below, a beautiful forest dwelling Barred Owl kept careful watch over the runners, and reminded everyone of the many non-human inhabitants of the lands the MVP passes through.

With the first several days of the protest underway, MVP Protest Runner Sarah Hodder reflected, “it’s really hard to put into words all of the experiences we’ve had so far. We’ve been overwhelmed by the incredible community of folks who have come to our side to help us on this journey. I’m grateful to have had the opportunity to meet locals who have been fighting this pipeline since the very beginning. Hearing their stories and learning about their struggles has really been an eye-opening experience. These folks are just a small fraction of the communities within the 124 miles we’ve covered so far, and we’re not even half way through the length of the pipeline. West Virginia is truly a special place with some of the kindest, most generous people. We’ve got a ton more ground to cover and many more stories to hear — I can speak for all of us in saying that this has already been an eye-opening and truly educational experience.”

The runners had to juggle taking care of their bodies, navigating incredibly challenging routes and unexpected bumps in the road, yet their purpose remained crystal clear. As MVP Protest Runner Katie Thompson stated, “who knew the mountain state would be so hilly. But we’ll take it. Getting to the top of the mountain means it hasn’t (yet) been removed. We ran through some of the most beautiful rural countryside, including Erbacon with a town sign “Erbacon: Nice people live here” and indeed they were very nice, waving and smiling as the strangers running with a flashy van drove by. This state has so much to offer, much more than the last of its natural resources. We were yet again met with kindness and overwhelming support, as well as an incredibly generous donation from another local that gave us extra pep in our step.”

Midway through the run, Mercedes Walters commented, “one of my favorite aspects of this project has been interacting with community members who have shattered my perceptions of West Virginians and opened my eyes to the struggles that they face. I can’t wait to share what I have learned – but for now we keep pluggin’ along.”

Along the way, the runners paused to speak with impacted community members and landowners. They enjoyed the hospitality of the Laferriere family, and heard a firsthand account of their experience with the Mountain Valley Pipeline. Neil Laferriere recalled to the runners, “when we first walked out on this property, it was June. The blackberries were all in bloom, the multiflora rose bushes were in bloom. My wife being an herbalist, we were looking and seeing all the potential…we planned to finish raising our family here and retire here. We’ve been looking for this piece of property for years. Dream may be shattered but it’s still a dream. What do you do, y’know? It’s not like you have the ability to go out and buy another 115 acres?”

As the runners continued on, they received a warm welcome and generous donations to their fundraising efforts from other communities such as Summers County, Monroe County, and enjoyed a special visit from Red the Pipeline Fighting Tractor.

The runners finished their West Virginia sections on a high note, having revitalized and re-uinted communities along the way in their fight against the Mountain Valley Pipeline.

Community members, organizers and other supporters took stretches of the MVP Protest Run on Saturday morning in Virginia to share the load and walk, hike or run in solidarity.

As the runners made their way through Virginia, they had a chance to run together on the MVP Right of Way. The experience was hard to process, due to the scale of the pipe and the obvious destruction of the land, they reported afterwards.

On Sunday May 2nd, the Bent Mountain community, Preserve Bent Mountain, the MVP Protest Runners, supporters, and representatives of the Monacan Indian Nation Cultural Foundation’s board of directors gathered for lunch; to learn, to renew and to expand the communities fighting against the MVP. The gathering’s attendees discussed the Mountain Valley Pipeline, history of impacted lands and where things stand today. Those gathered acknowledged that the pipeline crosses lands that are the ancestral home of tribes that were part of the Monacan alliance.

The runners wave their Preserve Montgomery County VA “NO PIPELINE” shirts across the finish line — the end of a monumental effort, an incredible addition to brave acts of resistance, and a testament to the power of the people.

Help the runners get to their $15,000 goal, with funds benefitting POWHR and the Monacan Indian Nation Cultural Foundation.

Thank you to all those whose hard work made this run possible and so impactful.

Sign up for POWHR’s email updates and newsletter here!