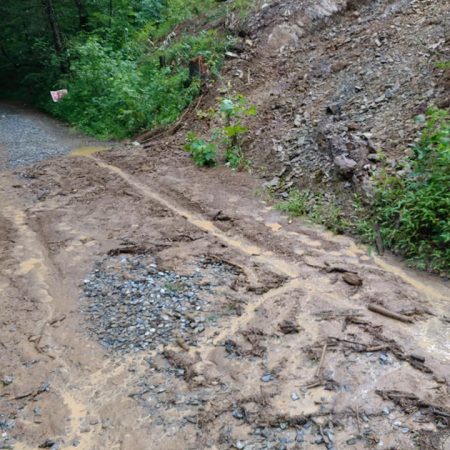 Montgomery County, VA — At the close of business today, the Virginia Department of Environmental Quality (DEQ) released a statement that the agency had issued a Stop Work Order for the Mountain Valley Pipeline on a two-mile stretch of the route in Montgomery County, VA. DEQ indicated that the only work allowed on the site at this time is the work required to install and maintain erosion and sediment control devices.

The agency did not clarify in the statement where exactly the issues — cited by DEQ in an August 1 inspection — occurred and what mileposts, the common location reference used by most along the route, are covered under the Stop Work Order. The instruction itself, separate from the statement and found by navigating through DEQ’s website, noted it was in effect “on spread H from STA 12482+67 to STA 12544+06 including sediment discharge to S-EF19,” which is an unnamed tributary to Indian Run that MVP is crossing near Cove Hollow Road and Yellow Finch Lane.

In the statement, Director David Paylor stated he was “appalled” that MVP had clearly prioritized the project’s deadline over erosion and sediment control measures.

Russell Chisholm, POWHR Coalition Co-Chair
“I am appalled DEQ is in any way surprised that MVP crews are neglecting erosion and sediment control measures in an attempt to ram this project through as fast as possible. Our volunteer citizen monitors have been telling the DEQ and State Water Control Board since August 2018 and earlier that MVP was not upholding the requirements of the bad permit they issued in December 2017; those in positions of power chose to ignore our calls for real, meaningful enforcement through a stop work order and instead allowed MVP to work despite several missing federal permits, a pending lawsuit for violations, and at least 35 Notices of Violation in West Virginia.

“We demand the DEQ and the SWCB to take further action against MVP and its contractors by stopping work on the entire route in Virginia.”