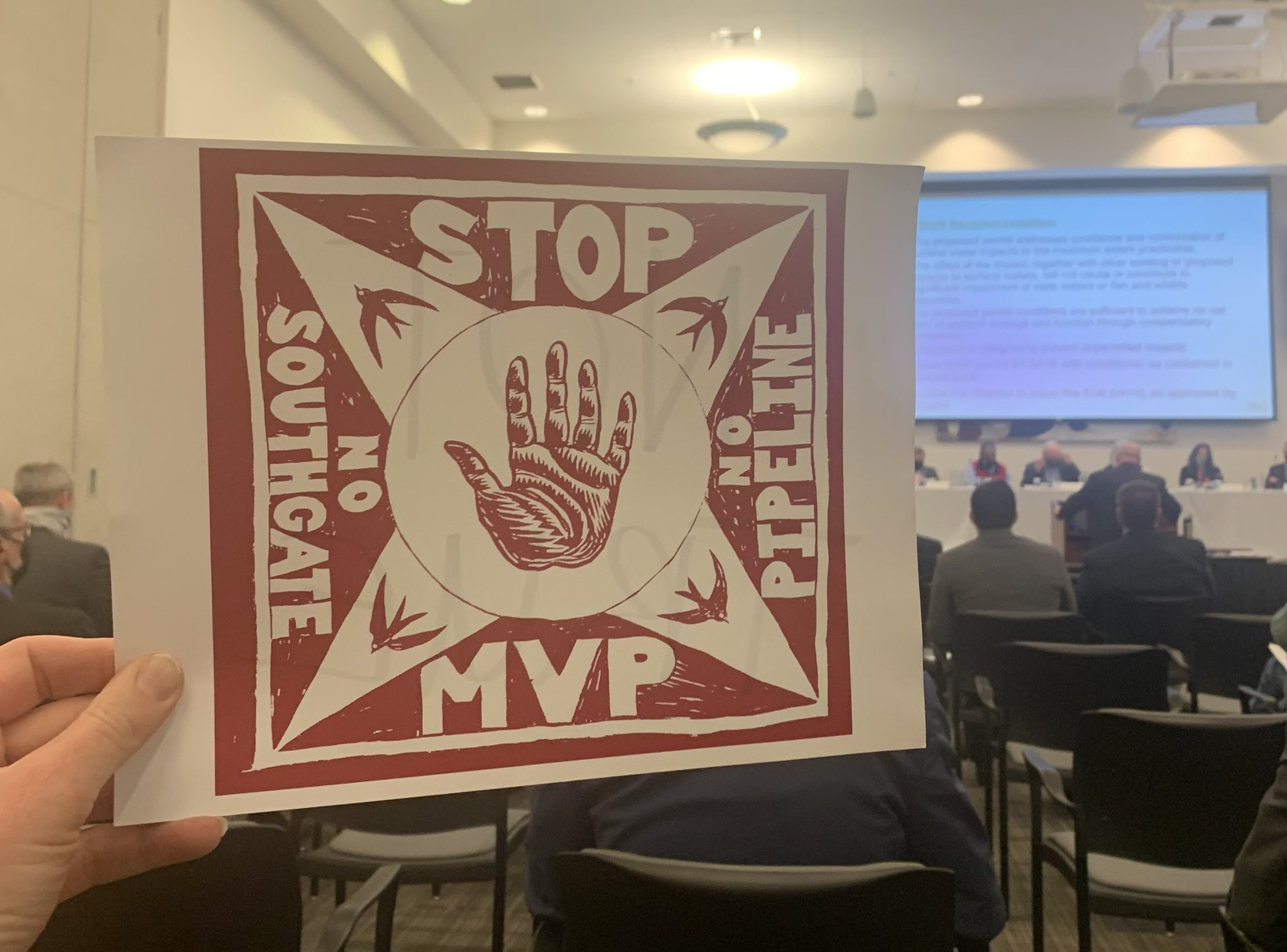 Richmond, VA — Today, the Virginia State Water Control Board approved a water permit for the Mountain Valley Pipeline (MVP) via a 3-2 vote, finalizing state approval for the MVP to build across hundreds of Virginia waterways.

The Board is an independent regulatory body composed of seven private citizens appointed by the Governor. Despite significant evidence to the contrary, the Board accepted the Virginia Department of Environmental Quality’s recommendation and found that the agency’s draft permit will adequately protect more than 200 water bodies in the state from the pipeline’s impacts. Under the Clean Water Act, projects like pipelines that release pollutants into U.S. waters must secure both federal and state permits that assure water quality standards will not be violated. The MVP has already violated Virginia’s water protection laws more than 300 times and has been heavily fined for failing to control erosion and sediment.

Despite this decision, the fight to stop the Mountain Valley Pipeline continues. The project still needs authorizations from the West Virginia Department of Environmental Protection and the U.S. Army Corps of Engineers in order to cross water bodies. Additionally, the Federal Energy Regulatory Commission has yet to rule on MVP’s request to bore under waterways in West Virginia and Virginia.

Roberta Bondurant, Co-Chair of the Protect Our Water, Heritage, Rights Coalition (POWHR) responded: “As we reflect on the losses of neighbor landowners and communities suffering MVP’s destructive effects on land, forests and waters, in the midst of an intensifying climate crisis, Virginia’s Water Board has marked for itself an infamous place in history. In granting MVP, a 300 plus repeat offender, a Clean Water Act 401 permit, Virginia regulators have shown its willful indifference to the stark reality of climate catastrophe and squandered an opportunity to do real environmental justice for the people of Southwest Virginia.

“MVP’s chosen route for its mega-pipeline, blasting and barreling across steep, landslide and earthquake prone mountain slopes, our pristine streams, and protective wetlands, multiplies already high risks of drinking water pollution and fiery explosions, imposing constant threats upon vulnerable and often silent witnesses in its path — including the elderly, single, low- and fixed-income residents, people of color, military veterans, and the disabled. MVP at once renders whole communities either ‘pipeline prisoners,’ or if they are fortunate enough to be able to leave, ‘environmental refugees.’ The result today, shameful but not surprising, leads us to brace for MVP’s continued wrath upon our people and their great places. We will go forward– relentless in pursuit of environmental justice — for the livable future that is the birthright of today’s and future generations.”

Peter Anderson, Virginia Policy Director for Appalachian Voices said: “While we are very disappointed with Virginia regulators’ decision today, the Mountain Valley Pipeline still has a long and uncertain road ahead. We remain convinced that this pipeline cannot be built in compliance with the law, and we will continue to stand with impacted communities as they fight this unnecessary and dangerous project.”

Lynn Godfrey, Sierra Club Virginia Chapter Community Outreach Coordinator, said, “The Mountain Valley Pipeline mainline is billions of dollars over budget, three years behind schedule, and has racked up more than $2 million in fines for water quality-related violations in Virginia and West Virginia. The MVP project already threatens 236 of Virginia’s waterways and this latest permit would signify the continued disregard of water sources essential to maintain a healthy ecosystem with lasting and permanent impact to Southwest Virginia’s waterways. We will not stand by as regulators continue to give a free pass to corporate polluters and will pursue all legal avenues to ensure that this pipeline is never completed.”

Elle De La Cancela, Central Virginia Grassroots Organizer for Chesapeake Climate Action Network: “The decision to permit a pipeline that has already amassed over 300 violations of existing permits is not only reckless, but works against the interests of residents of the Commonwealth and threatens the existence of all living things. We need to act on climate now, and this is a major step in the wrong direction. The MVP will undoubtedly continue to destroy areas of private and public land, only to line the pockets of CEOs and investors. We will continue to fight, as we await decisions from our neighbors in West Virginia, the Army Corps of Engineers, and the 4th Circuit Court of Appeals.”