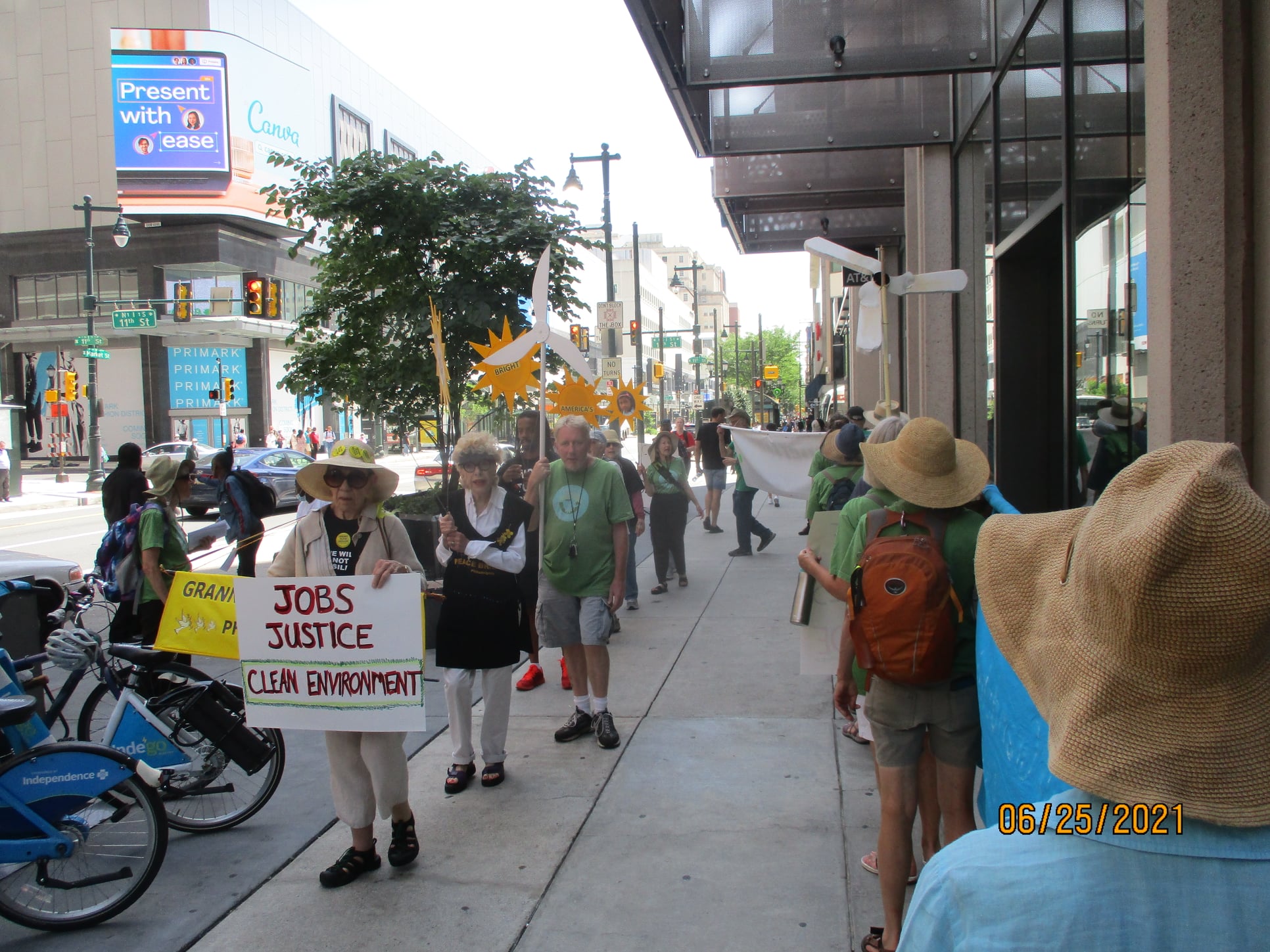 Last month, a group of grandparents and supporters trekked, walked, or rode over 170 miles during the Walk for Our Grandchildren and Mother Earth, from President Biden’s birthplace in Scranton, PA to his longtime home in Wilmington, DE, in an effort to urge significant climate action to protect future generations and the Earth. POWHR’s own Maury Johnson, our ‘Hero from the Holler‘, tackled this effort with his signature energy and uniting spirit. He towed an essential logistical piece of such an endeavor — a port-o-pottie — on his trailer and carried dozens of signs, snacks and water for the day’s walk, as well as offered morale-boosting encouragement to those taking part. Maury indicated that he felt called to take part of this effort not only because of its massive importance for all life on Earth, but to keep the Mountain Valley Pipeline (MVP)’s woeful and unnecessary greenhouse gas contributions and ecological disturbances in the national attention as part of the national movement to stop climate change.

Over the course of the walk, the participants held rallies in Scranton and various areas in Philadelphia. They visited groups and communities that are severely and disproportionately impacted by fossil fuel infrastructure pollution and overbuilding in areas like Easton, Chester, Marcus Hook and West Philadelphia in Pennsylvania as well as throughout New Jersey and Delaware. The events culminated with a non-violent civil disobedience action at Chase Bank’s World Credit Card Processing Center in Wilmington, DE. The walkers wanted to call attention to Chase and other big banks’ funding of the destruction of the Earth, as they are one of the largest funder of U.S. fossil fuel projects, including the MVP. The walkers wanted to push President Biden to act to curb climate change and invoked their love of their children, grandchildren and the Earth to do so. They used rocking chairs during the civil disobedience to evoke the image of grandparents in rocking chairs, fighting for a livable future for their grandchildren. (Do YOU want to divest your money from fossil fuels? We show you how to do that here)

Maury reflected on his own involvement in this effort and his long fight against the Mountain Valley Pipeline, saying “my job is to be a connector, to reach out when I can to other people. To invite all the people I know all over the country to join us and connect with each other.” He noted how many people and organizations came together for this endeavor, noting people that helped to feed the walkers, organize the massive effort and provide first aid. Documentary film producer and and film company Loud Valley Productions owner Matthew Pickett documented the walk and connected with communities disproportionately affected by polluting industries — stay tuned for documentary footage of the event. The 2021 Walk for Our Grandchildren and Mother Earth ended up gaining extensive media traction, and Maury remarked that this was crucial, for “a lot of connections between people fighting different pipelines were made – but it’s all the same fight. It’s about the climate, about an uninhabitable Earth, about exposing the financiers, and about putting pressure on Biden to do the right thing – as he promised he would do.”

Maury recounted that his favorite part of the walk was meeting like-minded people who are fighting for a livable future and caring for each other along the way. He published almost daily Facebook live videos featuring activists, organizers and community members he met along the way, and united communities across fossil fuel fights throughout the nation. When asked what he would like readers of this blog to do, Maury said “do something. Anything. Everyone can do a little something. Whatever talents you have, [use them]. Sign onto a letter. Do something.”

If you’re looking for a way to get involved with fighting the MVP, protecting Appalachia from fossil fuel infrastructure development and working for environmental justice, sign up for POWHR’s newsletter here to get more stories like this in your inbox and calls to action for how YOU can do something! (Maury will be proud!)

Learn about the organizers and residents of Chester, PA, where the walk passed through, and their fight for clean air and justice. Visit Chester Residents Concerned for Quality of Life (CRCQL) website here. Watch this special event ‘Documenting Sacrifice Communities’ put on by a POWHR Coalition group, Preserve Montgomery County VA (PMCVA), featuring Matthew Pickett and Chester, PA community organizer Will Jones, who met during the 2021 Walk for Our Grandchildren and Mother Earth. Learn about Chester’s fight for environmental justice and how YOU can get involved in solidarity – we are all in the same fight.

To see more media coverage and learn more about the 2021 Walk for Our Grandchildren and Mother Earth:

Below are some more of Maury Johnson’s photos from the 2021 Walk for Our Grandchildren and Mother Earth: