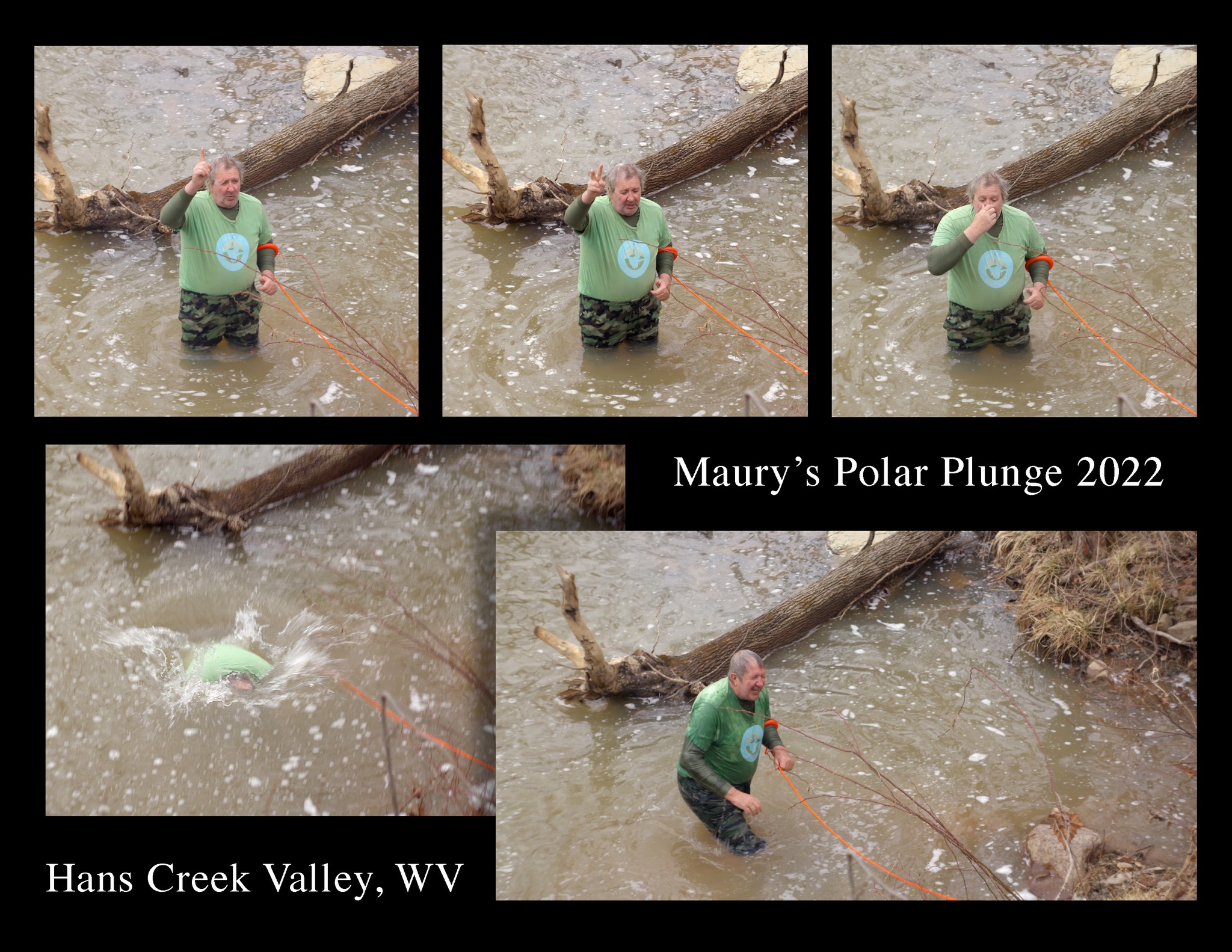 On February 26th, I completed a Polar Plunge into two creeks near my home. Indian Creek and Hans Creek are very special to me in many ways and a central part of my fight against the Mountain Valley Pipeline (MVP).  People have asked me, “Are you crazy?” and “Why would you do this?” The answer is complicated.

First off, over the last several years I have watched many friends and acquaintances put themselves in the way of pipeline construction and risk arrest–and even brutality by law enforcement and the powers that be. I have felt guilty, for reasons I will not go into here, that I was not able to do more.  Recently, friends Jessica Sims (with Appalachian Voices) and Elle De La Cancela (with Chesapeake Climate Action Network) took a plunge into the James River and the Chesapeake Bay to raise money for CCAN (I told them they were crazy!). This winter, we received word of a decision from the US Court of Appeals for the Fourth Circuit finding that MVP construction does jeopardize endangered and threatened species, countering the U.S. Fish and Wildlife Service’s previous findings. This decision arrived a week after the Fourth Circuit ruled that the MVP cannot further devastate the Jefferson National Forest.

I have been engaged in that particular issue since the beginning of the MVP saga. In 2015 and again in 2017, I wrote extensively about many threatened, endangered and globally significant plants and animals that were being put at risk by the MVP. One of those was the then threatened, now endangered, Candy Darter fish (see above photo). I have been familiar with the Candy Darter for nearly 50 years. It was once found in Hans Creek and Indian Creek where I played, fished and camped. When it came time to have it included in the Endangered Species List, I worked hard to help it gain that status. This was during the most environmentally harmful administration this country has possibly ever known. Unbelievably the Candy Darter achieved that status in 2018, during that administration. The spot where I plunged is only a couple of hundred feet from one of the areas where we used to see Candy Darters.

Another issue is that of cultural history. The MVP somehow got approval to cross Indian Creek where I and dozens and dozens of other people have been baptized in the last 150+ years as part of the Greenville United Methodist Church, one of the oldest congregations west of the Appalachian Mountains.  My plunge into Indian Creek is only about ½ mile below that spot.

I have always been concerned about the environment. I have been on the environment committee of our local Greenville Ruritan club, where I have been a member since 1983. Over the last 75 years our club has received numerous awards for our community involvement, including many awards for our environmental stewardship. I was a 4-H and Conservation and Ecology Club member in our local community when growing up. Those organizations also instilled a lifetime sense of environmental stewardship in me. Our clubs also won awards for our work, including stream clean-up, water monitoring, road and trail clean up. These experiences are where I first fell in love with the Appalachian and Allegheny trails that pass through Monroe County.  About 10 years ago, I became a member of the Indian Creek Watershed Association and then later the WV Rivers Coalition.

This brings me to my ‘Plunge’ a few nights after receiving the news that the Fourth Circuit Court had once again overturned the US Fish and Wildlife Service’s Biological Opinion. When this happened, I was on a Zoom call about the MVP that included Jess and Elle. It dawned on me that organizing a ‘polar plunge’ was something I could do. It might be uncomfortable, but I could do it. I could also use this as a chance to raise some money for two great organizations engaged in the fight for clean streams and protection of water resources. I could in my own little way, “get in the way”.  I hope this makes sense and that if you have not already donated that you will.

I was hoping that we could have live streamed this on the WV Rivers Coalition’s Facebook page by Autumn Crowe, but being in rural West Virginia, even though we tried, it did not happen. However there are two excellent videos made by Loud Valley Productions’ Matthew Pickett and ICWA/Preserve Monroe member Paula Mann. You can watch those videos here. You can also check out the photos taken by me, Preserve Monroe Chairperson Roseanna Sacco, Preserve Giles and POWHR Co-Chair Russell Chisholm and Reni Fulton.

One thing you definitely missed was the Candy Darter Cake and it being eaten by Autumn Crowe’s young son.

Again, thank you all for your support, and as I often say, “do something.”

NOTE: As of February 28thth we have raised over $2000 for WV Rivers Coalition and nearly $5000 for ICWA. The reason for the second very icy plunge into Hans Creek was that I pledged that if we could raise $3000 dollars by Saturday 2/26 I would take another plunge into Hans Creek at the Ellison’s Mill Pond Pool. I knew people wanted to support the work of ICWA and WV Rivers, both have been intrinsically involved in our fight with MVP and other efforts to protect the waters of Appalachia. I want to express my extreme gratitude to all who donated or supported this highly successful effort in any way. Let’s keep this going, and please share with friends and neighbors. The ICWA and WV Rivers Fundraisers will continue through the month of March, details are below.

I would like to thank the many people who have been involved with this, including Jessica Sims (AppVoices), Elle De La Cancela (CCAN), Autumn Crowe (WV Rivers) , Paula Mann (Mountain Media Productions), Russell Chisholm (POWHR Coalition), Matthew Pickett  (Loud Valley Production, LLC), Grace Tuttle (POWHR & Wild Virginia), Roseanna Sacco (Preserve Monroe), Nancy Bouldin  and Judy Azulay (ICWA & Save Monroe) along with several others not mentioned. They are an incredible team.

You can learn more about the West Virginia Rivers Coalition here.

You can learn more about the Indian Creek Watershed Association here.

You can learn more about the endangered Candy Darter and Roanoke Log Perch here and here.

For photos taken during the Polar Plunges you can go to this page (You do not have to have a Facebook Account to view this gallery.

A video of the “Plunges” can be viewed here.