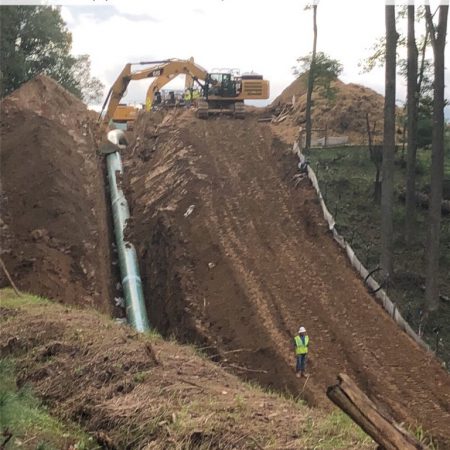 Virginia’s Department of Environmental Quality stated the morning of September 11 — two days before reported landfall of a Category 4 hurricane — that the agency had “directed work to stop” on the Mountain Valley Pipeline and that construction had in fact stopped.

Yet communities report active construction several counties in Virginia and West Virginia. Instead of devoting a downsized workforce to true erosion and sedimentation control, MVP continues to weld and trench this evening, September 13, with floodlights and fleets of earthmovers active after 9pm on Bent Mountain and Franklin County. Downsized crews are welding new pipe and digging new trench is occurring to the exclusion of effective erosion and sediment controls along drastic slopes adjacent to fragile streams and resident communities.

Representatives of DEQ have responded to public outcry of new, rushed and aggressive construction activity by stating that they have no enforcement power of this “directive” and MVP “voluntarily” opted to stop work.

“There comes a point when the public asks if the apparent ineptitude, dodging, and doublespeak of the Governor’s representatives are in fact complicity with MVP. DEQ’s failure to enforce its  “stop work directive” on the Mountain Valley Pipeline shows the Commonwealth’s willingness to roll over while MVP decimates communities in its path. If DEQ were earnest in its issuance of a “directive,” the Virginia State Police would have been on the right of way all week, seizing the keys to the excavators. Governor Northam’s DEQ holds little credibility with residents in the path of MVP.

“The Mid Atlantic region, including MVP executives, have been aware of the the approach of Hurricane Florence for over ten days. MVP’s intentional and reckless drive to dig new trench and bury pipe in the face of predicted life-threatening conditions shows a contemptible disregard for the people who live here.”

“THIS IS A CRIME. Our waters are being destroyed by the MVP. Our regulators, government and decision makers are NOT listening and holding them accountable. The photos you see here are in DIRECT violation of erosion, sedimentation and stormwater management standards for which our DEQ is supposed to be responsible. Does this look like responsible management to you? Demand accountability.

“As we approach imminent extreme weather from a massive hurricane that exemplifies our concerns about the climate crisis and underlines the necessity of breaking our addiction to fossil fuels, we MUST continue to protect our water. DEQ does not seem to know how. There is NO REASONABLE ASSURANCE that our water quality standards are being considered, much less enforced.”

“My family lives across the road from the destruction. We can’t always see what they’re doing — honestly I don’t think they WANT us to see — but we sure can hear it. They’re tearing things up from early in the morning to well after dark. Drives us crazy, beep-beep-beeping as they back up. And after that rain last weekend, the flooding next to 221 was just awful.”

One thought on “With Impending Hurricane, MVP Continues Rushed Construction”